NVIDIA has a plugin for UE4, called Ansel. Ansel is an automated way to capture screenshots in game – including 360 panoramas, and 360 stereo panoramas. Ansel has been intergrated into a couple of games already, but the UE4 plugin makes it easy to integrate it into your project.

Simply enter Ansel mode and capture a 360 picture. The result looks something like this: 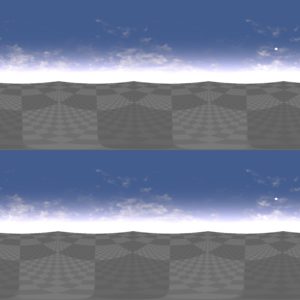 This is a stereo panorama, the scene has depth when viewed in VR. (Hint: Click the “fullscreen” icon in the bottom right!)

The Ansel plugin is not integrated in the new Unreal Tournament. I ported my PaleoPark map over to a separate project and installed the plugin. Here are some results: