How to generate a starry night sky in Unity using real-world data.

⚠️ This implementation does not work anymore with the latest version of Unity.

The data-gathering part of this article is still relevant, but the particle system implementation is defunct.

Creating a star field in Unity is not that tough, and in this article I will describe how to create a star field with a particle system using real-world data of the stars we see in the night sky. And all in only one drawcall!

For this, we will use the HYG database, a combined database collected by David Nash, which contains a whole bunch of data on about 100.000 stars, but there’s 4 variables we’re interested in:

the apparent magnitude (brightness) of the star, and it’s Cartesian (XYZ) coordinate is space, relative to earth. 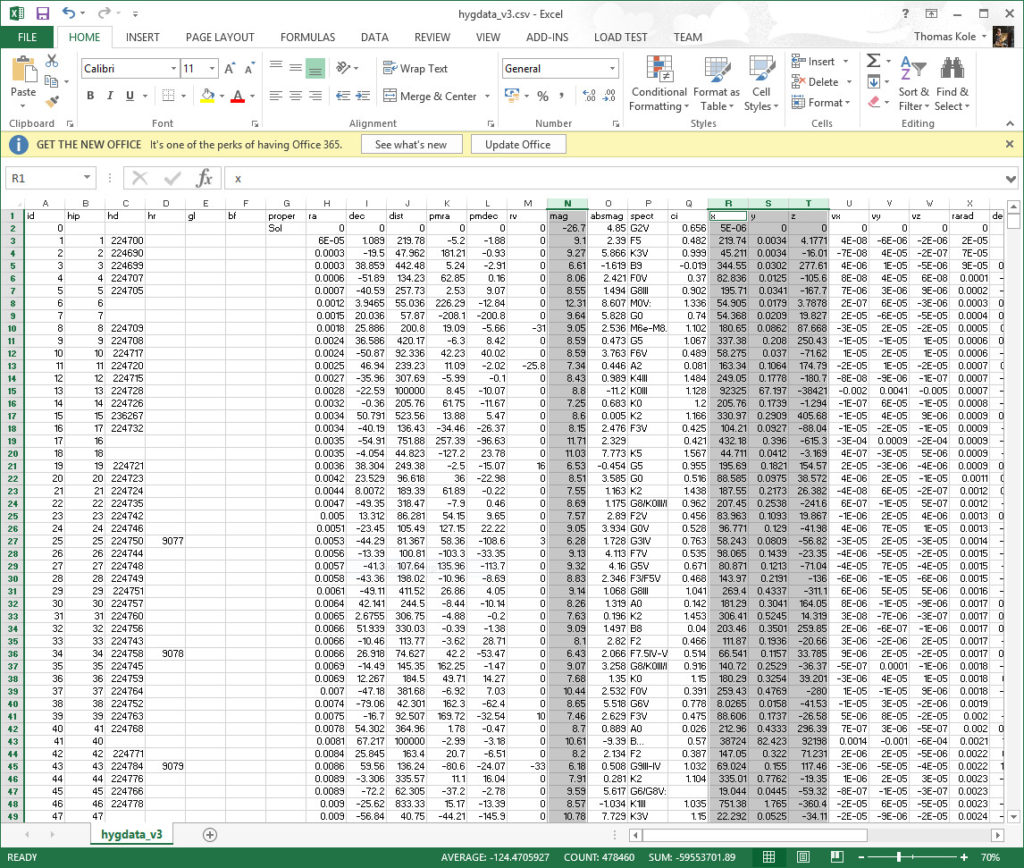 With this data, it becomes incredibly easy to put the stars into our own night sky.

We open the .csv sheet (Comma Separated Value, a basic spreadsheet) in a software like Microsoft Excel, or Libreoffice Calc. The procedure will be the same in both programs.

Just copy and past the columns so that they are in the following order: (mag, x, y, z).

After we isolated the data, we will sort the rows based on the magnitude, the first column.

The procedure is the same in Excel and Libreoffice Calc, select the four columns, and go to data > sort. Sort by the column A, in ascending order.

Don’t be fooled, the apparent magnitude of a star is inverse to it’s brightness! Stranger still, some bright stars go below zero! The top value should be somewhere around -26.7, with very small coordinates; that is our sun! We can remove this one, as it’s position is dependant on the time of year.

Now that our data is in order, we can move on to Unity, and have some fun.

In Unity, create a new particle system, disable everything except “emission” and “renderer”.

Set the rate of the emission to 0, the scale of the particles to around 10, and the speed to 0 (important).

Create a new C# script, I called mine “StarParticleCreator”

We also need a public integer that will serve as our maximum particle count, as we probably don’t want to draw ALL 100.000 stars.

Attach the script to the particle system, and we’re ready to begin.

In the Awake() function, we will set the burst array of the particle system. We do this to spawn that amount of particles at the beginning of the scene.

The bursts must be given as an array of bursts, but we will just create and array with a size of 1.

Now comes the fun part. We’re going to read the file, and put the particles in the right place during the Start().

We create a new public TextAsset called starCSV, and in the Unity inspector, we draw the .csv sheet we processed earlier.

We create a new array of strings, called string[] lines. We get the text from the TextAsset, which will be one giant string, and break it up for every new line, with simply the folowing line:

Now we can loop over the lines, and do something for every particle.

Withing the forloop, we will create a new array of strings, which will hold the components of each line, separated by comma.
string[] components = lines[i].Split(‘,’);

The code to put the particle at the stars position is not the prettiest, but here’s how it works.

The Cartesian coordinates we were given were not in the same coordinate system Unity uses.

It is described on the website as the following,

It sounds very complicated, but it comes down to this:

Note that component 2 and 3 are flipped.

This creates a new Vector3 with the right positions for the stars.

We also want to set the lifetime of each particle to Infinity.

Let’s set the particle count in the Unity inspector to 100.000, and check out the results. 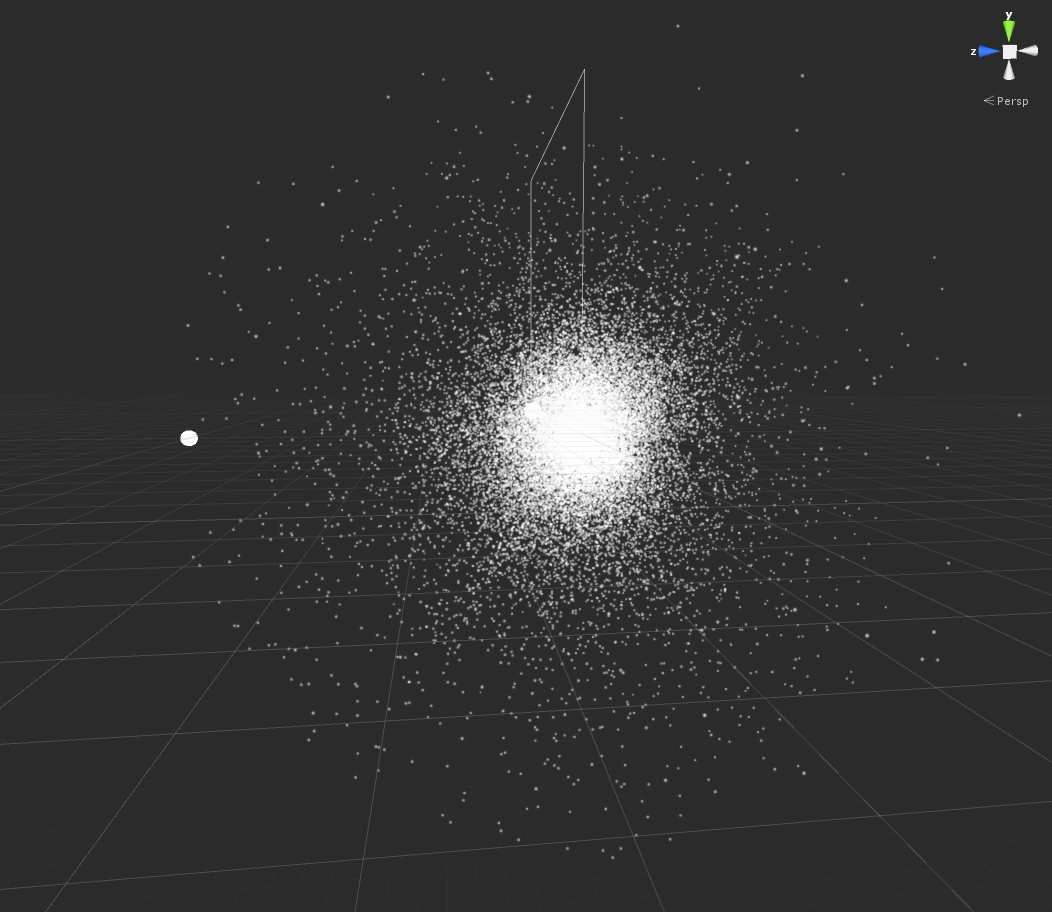 However, because we are dealing with stars on a stationary night sky, we can normalize these vectors, and multiply them with a large number, to put them in the right position on our screen. We will multiply the normalized value with the far clipping plane of the main camera, minus a little bit.

This is a lot easier to work with, but still incredibly chaotic. If we tone down the maximum stars to around 1000, you can kind of make out Orion and the Pleiades. But it doesn’t look quite nice yet. We should take the brightness of the star into account as well.

The equation to do so is a bit unorthodox, somewhere between an art and a science. 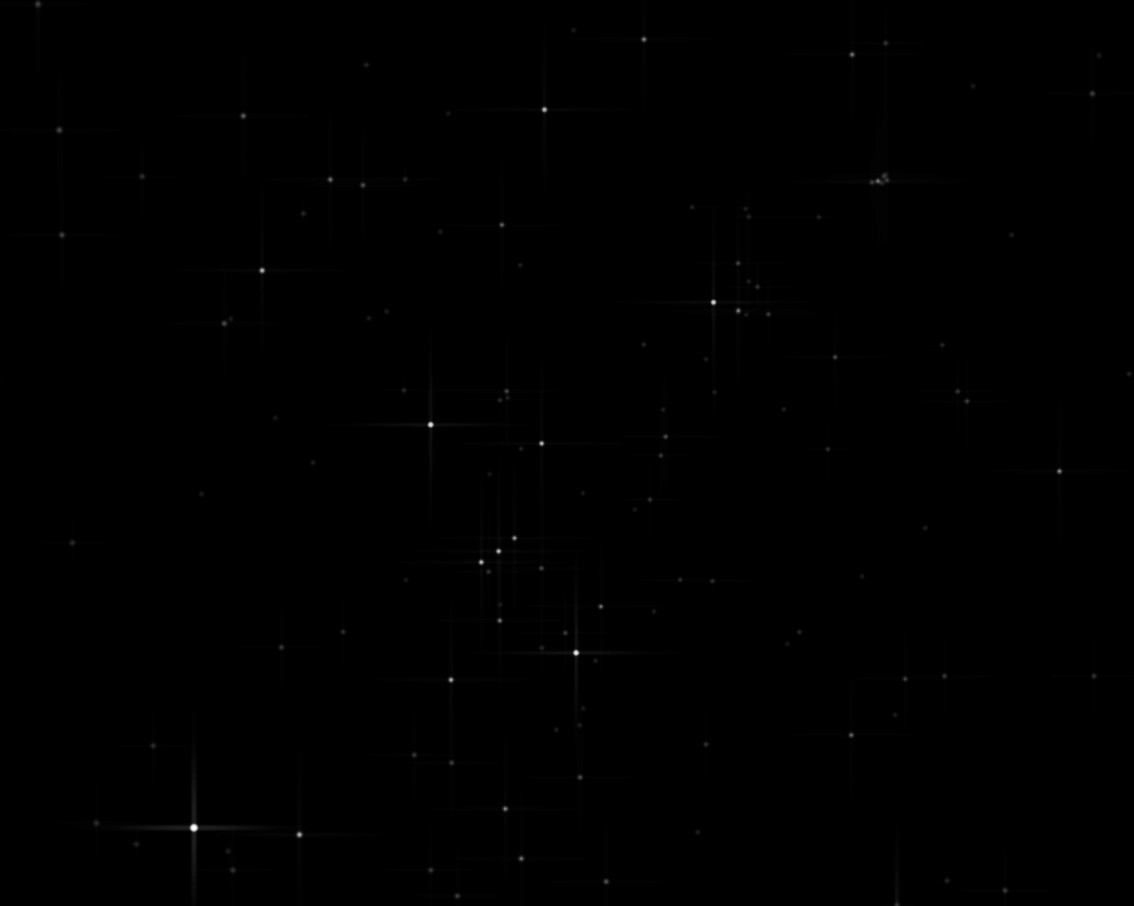 When rendering a natural amount of stars (about 1000), dividing by 8 produces nice results. For more stars, go for 10 or 15.

Or try for yourself and see what works for you, maybe raising it to a power, or sampling from a gradient ?

There’s this website that analyzes pictures of stars you throw at it. To check if your script is functioning correctly, upload one and see what happens!

It detects ours just fine! Hooray!

In practice, there’s a few things you might want to consider.

First of all, you’d probably want to cap off the .CSV file, as right now it is a whopping 4mb.

Also, to render more stylized looking stars, you could opt for rendering small billboards of streaks, but beware of overdraw!

Limit the amount of stars you draw depending on your target platform. Although handling particles is Unity’s business, and it’s only one drawcall, it’s still worth profiling!

How to generate a starry night sky in Unity using real-world data.

3 thoughts on “How to generate a starry night sky in Unity using real-world data.”